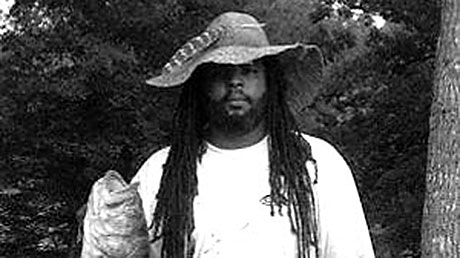 Alvin "Youngblood" Hart (the "Youngblood" refers to Native American ancestors) was born in Oakland, California (2 May 1963), but has family ties in Mississippi, where he spent some years of his childhood and learned to know the Country Blues, "by people who were around when this music was born"
His debut album, "Big Mama's Door" (1996) was a pure acoustic country blues album, where Hart sang and played guitar, banjo and mandolin. With this album, he won the 1997 "WC Handy Award" and received much praise from the musician colleagues. Taj Mahal said to Hart's guitar playing: "The boy has got thunder in his hands". Eric Clapton was enthusiastic about Alvin Hart's debut album as well.
One thing Clapton and Hart have in common: both are guitar enthusiasts. Hart owns and plays at least two dozen guitars, and other stringed instruments such as mandolin and banjo. This instrument also appears on the last album by Otis Taylor, where Hart played as a guest musician.

Thus one understands Hart's credo to know "no musical boundaries". He moves his stylistic range in the direction of country, ska and rock.
With the album "Start With The Soul" Hart went one step further and showed that he does not want to be stuck in a stylistic category by adding soul and Southern rock elements.

"Down In The Alley" saw Hart returning to acoustic country blues with interpretations of his role models Bukka White, Leadbelly, Charley Patton, Skip James and Sleepy John Estes. In 2003 this album was nominated as "Best Traditional Blues Album" at the Grammy Awards.

2003 Hart worked in the band project "JoB Cain" with Audley Freed of the Black Crowes. Here he developed a harder guitar blues-rock, as expressed on Hart's last album to date "Motivational Speaker".

In addition, Alvin Hart has been involved in many tribute projects:
On "Paint It Blue - Songs Of The Rolling Stones" he even interprets two songs (from"Sticky Fingers ") :"Sway" and "Moonlight Mile", outing himself as a Stones fan of the Mick Taylor era.
On the Hound Dog Taylor tribute album he contributed an acoustic version of"It's Alright" together with Vernon Reid.
On the "Tangled Up In Blues Series" he edited and interpreted songs by Bob Dylan and Led Zeppelin.
The tribute series to Mississippi John Hurt and Robert Johnson, two founding fathers of the blues, include some of his work.