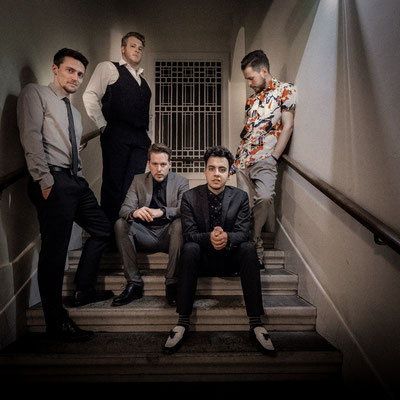 The young band has been founded in 2015 in Muenster, Germany. Nowadays organ and piano player Nico Dreier is living in Osnabrueck. During the last years the band has been known by insiders of the German blues scene only.Taking part in Bluesfest Hildesheim and Blue Wave Festival on the isle of Ruegen, Germany, gave the band a wider range of popularity.

Taking them by word they are playing „21st Century Blues“ consisting of Texas Blues, swinging Jump and Westcoast Blues in a modern context. Nico Dreier sets accents as a virtuoso soloist on piano and organ. Following him is guitarist Filipe Henrique de la Torre (from Portugese origin). Philipp Dreier, twin brother of Nico, on drums and Nicolas Karolewicz are contributing a solid rhythm section. Last but not least singer Melvin Schulz is standing his ground in front of the stage. The Bluesanovas had been issued two CDs so far: „Bluesanovas“ (2018) and „Emergency Call For The Blues“ (2019).